Rise of the Tehrik-i-Taliban Pakistan 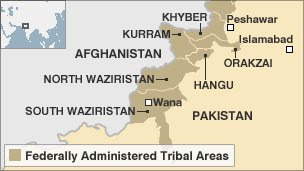 FATA (Federally Administered Tribal Areas) (Pashto: مرکزي قبایلي سیمې) is a semi-autonomous tribal region in the northwest of Pakistan, lying between the province ofKhyber Pakhtunkhwa, Balochistan, and the neighboring country of Afghanistan. FATA comprises seven Agencies (tribal districts) and six F.Rs (Frontier regions). The territory is almost exclusively inhabited by Pashtun tribes which are predominantly Sunni Muslims by faith. The total population of the FATA was estimated in 2000 to be about 3,341,070 people, or roughly 2% of Pakistan's population. Only 3.1% of the population resides in established townships. It is thus the most rural administrative unit in Pakistan.
The region was annexed in the 19th century during the British colonial period, and though the British never succeeded in completely calming unrest in the region, it afforded them some protection from Afghanistan. The British Raj attempted to control the population of the annexed tribal regions with the Frontier Crimes Regulations (FCR), which allowed considerable power to govern to local nobles so long as these nobles were willing to meet the needs of the British. Due to the unchecked discretionary power placed into the hands of the jirga put into place by these nobles and to the human rights violations that ensued, the FCR has come to be known as the "black law." The annexed areas continued under the same governance after thePartition of India, through the Dominion of Pakistan in 1946 and into the Islamic Republic of Pakistanin 1956.
According to the United States Institute of Peace, the character of the region underwent a shift beginning in the 1980s with the entry into the region of the Mujahideen and CIA Operation Cyclone, against the Soviet Union prior to the fall of the Berlin Wall and collapse of Soviet Union.

The FATA are bordered by: Afghanistan to the west with the border marked by the Durand Line, Khyber-Pakhtunkhwa to the north and east, Punjab and Balochistan to the south. 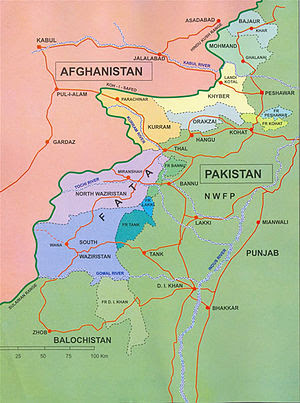 Rise of the Tehrik-i-Taliban Pakistan

In 2001, the Pakistani Taliban and al-Qaeda began entering into the region. In 2003, Taliban and al-Qaeda forces sheltered in the FATA began crossing the border into Afghanistan, attacking military and police. Shkin, Afghanistan is a key location for these frequent battles. This heavily fortified military base has housed mostly American special operations forces since 2002 and is located just six kilometers from the Pakistani border. It is considered the most dangerous location in Afghanistan. With the encouragement of the United States, 80,000 Pakistani troops entered the FATA in March 2004 to search for al-Qaeda operatives. They were met with fierce resistance from Pakistani Taliban.It was not the elders, but the Pakistani Taliban who negotiated a truce with the army, an indication of the extent to which the Pakistani Taliban had taken control. Troops entered the region, into South Waziristan and North Waziristan eight more times between 2004 and 2006 and faced further Pakistani Taliban resistance. Peace accords entered into in 2004 and 2006 set terms whereby the tribesmen in the area would stop attacking Afghanistan and the Pakistanis would halt major military actions against the FATA, release all prisoners, and permit tribesmen to carry small guns.In 2007 the Pakistani Taliban in FATA became officially known under the name Tehrik-i-Taliban Pakistan.
These Takfiri Taliban consider other Muslims who do not adhere to their fanatical distorted, heretic  views as infidels to justify indiscriminate killing. They have invented their own religion tarnishing the image of Islam. TTP has declared war against state of Pakistan and its people, attacking military installations, killing innocent people, children, women, young and old. Their terrorist acts only help enemies of Islam, Pakistan and Muslims. It is evident they are playing in the hands of Indians, Israelis and CIA /USA knowingly in unknowingly, who provide them with money, weapons, technology and intelligence to achieve their nefarious designs against the Only Muslim Nuclear power Pakistan. [More at http://en.wikipedia.org/wiki/Tehrik-i-Taliban_Pakistan]

On June 4, 2007, the National Security Council of Pakistan met to decide the fate of Waziristan and take up a number of political and administrative decisions to control "Talibanization" of the area. The meeting was chaired by President Pervez Musharraf and it was attended by the Chief Ministers and Governors of all four provinces. They discussed the deteriorating law and order situation and the threat posed to state security. To crush the armed militancy in the Tribal regions and Khyber-Pakhtunkhwa, the government decided to intensify and reinforce law enforcement and military activity, take action against certain madrassahs, and jam illegal FM radio stations.
US Drone attacks have killed only 1% militants, 99% innocent civilians, drawing string reaction and tribal revenge attacks in Pakistan killing over 30,000 civilians.
Described as the "most dangerous place on the earth" Pakistan’s tribal areas have witnessed ever increasing carnage. According to partial data compiled by the South Asia Terrorism Portal (SATP), a total of 5,023 persons, including of 4,296 militants, 490 civilians and 237 SF personnel, were killed in 672 incidents of killing in 2010 (all data till December 12), as compared to 5,238 persons, including 4,252 militants, 636 civilians and 350 SFs killed in 835 incidents of killing in 2009. This indicates is a decline of 23 and 32.3 percent respectively in the number of civilians and SFs killed in 2010, as compared to 2009. Militants’ fatalities, on the other hand, have risen marginally. The number of major incidents (involving three or more killings) has decreased from 383 in 2009 to 369 in 2010.
More>>>>>> http://en.wikipedia.org/wiki/Tehrik-i-Taliban_Pakistan

Related Links:
http://en.goldenmap.com/Tehrik-i-Taliban_Pakistan
CIA Drones Killed Over 2000 ...
A new report from the Conflict Monitoring Centre (CMC) has reported that 2043 Pakistanis have been slain in CIA drone strikes in the past 5 years, with the vast majority of them innocent civilians.
at 9:32 AM 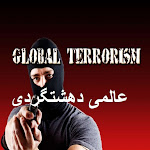